What To Do About A Television Centric Living Room 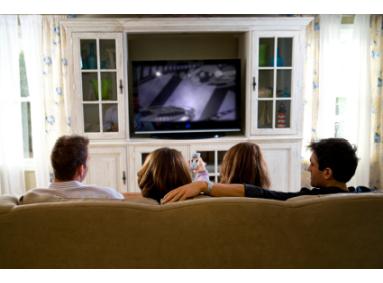 Although living rooms were once designed as social spaces, the modern world has transformed them into a different kind of space entirely. Now instead of gathering in the living room to talk with each other, people gather in the living room to veg out and watch. While staring at the tube all evening may be fulfilling for some, you may be wondering what you can do with a television centric living room to make it more enjoyable and social.

The first thing you should do is evaluate the positioning of your designer living room furniture and in particular your seating options. If your furniture is arranged in one main seating area, such as a sofa or loveseat then odds are that you have it placed directly opposite the television. This positioning suggests that the only thing you should be doing when sitting on the couch is watching television.

Shifting your living room furniture around to circle the television rather than face it directly can have a major effect on the conversation level and interaction level in your living room. Though you will still be able to clearly see the screen, you will also be able to more clearly see others in the room. This suggests to the mind that you can do other things besides simply watch the television, and prompts you to make more conversation with others. Another thing you can do is consider how obvious the television is in the room. Do you have it mounted on the wall like a prized object of art? Or is it a part of a larger entertainment complex? Either way, you may want to look at ways to block off the television from view when it is not in use so that it’s not the only focal point in the living room.

With flat screen televisions, you can hang a tapestry or drapery to fall over the television, shielding it from view without providing unnecessary clutter in the room. The curtain can also act as a signal to your friends and family that they are the focus of your attention, and not the television. The idea of hiding a brand new 50 inch TV behind a make shift curtain is definitely not our favourite suggestion but each to their own. For larger TVs, if you do not want to opt for a full cabinet, you may want to look at getting a standing screen. These screens provide a visual barrier to shut off the television, but can also be easily removed and stored when your favourite programmes are on. Or you can just do what we would do and get everyone round to watch the brand new, awesome TV – conversation is over rated when you have cable… it’s a guy thing. Tongue out

Are Your Dining Room Chairs Right for the Table?

Sun May 16 , 2021
Are Your Dining Room Chairs Right for the Table If you’ve been thinking about buying some dining room furniture or even a new dining room set and you have your heart set on a certain table, make sure that you are going to like the chairs as well. It might […]

Tips on Painting and Decorating